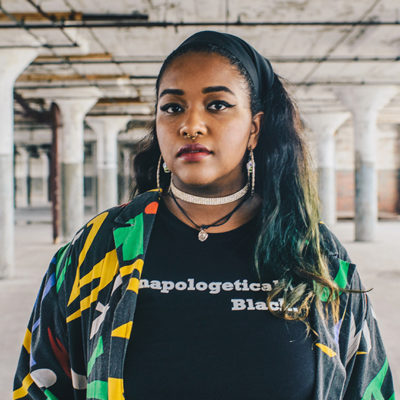 Eva Maria Lewis is an activist and artist from the south side of Chicago, Illinois, and Founder and Director of The I Project. She helped organized two Black Lives Matter protests, in Chicago, including the Chicago Youth Sit-In and March, bringing over 1,000 youth to the streets of downtown Chicago to protest police brutality. The Sit-In was featured in Chicago Tribune, Chicago Magazine. Lewis also wrote about her experience organizing and participating in the March for Teen Vogue.

A Girl Scout for ten years in an all African­ American troop, Lewis has been exposed to Black girl empowerment since before she could fully understand its true meaning. In addition to Girl Scouting, Lewis was always involved in the arts through dance, literature, and music. Entering high school, after the death and injustice of Trayvon Martin, she became interested in acting against social inequality. During her freshman year of high school, at Walter Payton College Prep, she became involved in Young Chicago Authors ‘Louder Than A Bomb’, the world’s largest poetry competition and festival. Spoken word poetry brought her interests in art and social justice full circle. After studying abroad in France the summer before her junior year, using interviews and footage shot in France, she created a short film on privilege called “Redefining Opportunity”. Soon after, she created The I Project, which combines art and activism to advocate for intersectionality. Lewis now writes for Teen Vogue about social justice and equality for all peoples, specifically people of color. She is now a student at the University of Pennsylvania on a full ride with the Questbridge College Match Scholarship.